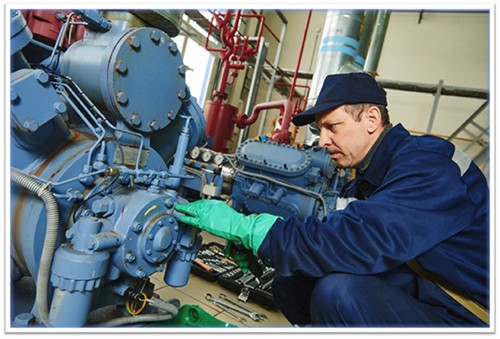 Portable generators malfunction for many reasons. When operating in an industrial environment, one can expect and must prepare for the inevitable.

Below are some of the most common industrial generator repair issues affecting businesses today, along with possible solutions.

The most obvious cause for a low coolant level is either an external or internal leak. While many portable generators are equipped with this alarm, few generators have a dedicated alarm indicator for low coolant. Usually, this alarm will be tied into a high coolant temp shutdown. If the generator is equipped with an “Approaching High Coolant Temp Alarm” or “High Coolant Temp Pre Alarm,” you can determine which fault caused the shutdown.

Related: Step-by-Step Guide: How Do I Get Temporary Power to My Construction Site?

The block heater actually heats the coolant which circulates around the engine block. Keeping the engine block warm prevents the oil from becoming too thick in cold temperatures.

A common misconception is that the engine does not need a block heater in warm climates. A block heater does more than help the engine to start in cold weather. Due to the dissimilar metals that the engines are built with, accelerated wear can occur during start up. The pistons, normally made of aluminum, will expand at a faster rate than the iron cylinder liners. This rapid expansion of the pistons can lead to scuffing of the piston skirt.

Block heaters relieve most of this scuffing by maintaining the cooling system temperature and keeping the cylinder liners expanded.

Leaks can be prevented by performing routine maintenance. Most often oil leaks are not, in fact, leaks, but the result of “wet stacking” (or “engine slobber”). Wet stacking is the accumulation of carbon particles, unburned fuel, lube oil, condensed water and acids in the exhaust system.

The most common fuel leak service calls are due to overfilling of the base tank. This is typically caused by human error or a failure of a pump system. In order to prevent this from occurring it is always recommended that you have a trained professional fuel your portable generator.

Controls Not in Auto

Portable generators have a control panel. This panel controls all aspects of the settings, running and shutdown of the portable generator. It displays all critical engine and alternator information and displays any “faults” that have caused it to shut down the generator. 99% of service calls received for generator controls “Not in Auto” are the direct result of human error.

Alarms not reset, breakers open, switch gear not reset and emergency stop buttons activated are all examples of not in auto failures. Several generators are set up to short trip the main circuit breaker during an emergency fault shutdown. When the portable generator shuts itself down (for any reason), someone has to physically reset the control panel to clear the alarm.

Fuel Bled Back Into the Tank / Generator Will Not Start

This is a common problem with newer generators that are not exercised on a regular basis. Closer tolerances within the fuel systems to meet today’s emission requirements make fuel systems more susceptible to air affecting the ability of the generator to start up. This is not as common with older generators. Older portable generators that experience this problem may have a leak in a line or check valves that are not properly holding the fuel in the engine.

Engine Ran Out of Fuel

Mechanical fuel level gauges may not always be accurate. Unlike a vehicle that is moving and using a higher percentage of its tank’s capacity, a generator tank has no movement, causing the fuel to become stagnant. Mechanical gauges may also stick in a position until vibrations break them free. Some portable generators are equipped with “Low Fuel Level Shutdown” or “Critical Fuel Level Shutdown”. The control panel will shut the generator down to prevent the fuel system from taking in air, when fuel depletion is imminent.

High fuel level alarms are required by government regulations to prevent the overfilling of a fuel tank. The alarm should activate when the fuel tank reaches between 90-95% capacity. This lets the person fueling the tank know when they should stop filling. There is normally nothing wrong with the portable generator when this alarm activates.

Breaker Trip Not Related to the Generator

This service call will usually come in as “We are in a power outage, and the generator doesn’t start”. First, verify that nobody has accidentally pushed a remote “Emergency Power-Off Switch”.

The transfer switch is smarter than you may think and has a specific reason for being in the position that it is in.

“My Generator is Running!”

After a local power outage, many service calls come in stating that “utility power is back on and the generator is still on.” There are a couple of reasons for this. One reason is a timer delay in the automatic transfer switch that will keep the generator online until the automatic transfer switch sees a steady supply of clean power coming from the utility grid. This timer is usually set between 15 and 30 minutes.

Have a question or comment for Power Plus!? We'd love to hear from you!